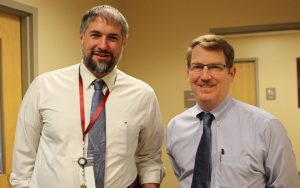 MILFORD, Del. – With partnership through the Delaware State Chamber of Commerce, Mohawk’s president, Scott Welch, will be the ‘Principal for a Day’ at Milford Central Academy in Milford, Del. on Tuesday, October 23, 2018.

The program was started back in 1993 by DSCC to create a stronger bond between schools and business community leaders. According to the state chamber, since 2004, schools in the first state have been visited more than 1500 times by community leaders.